The weather was unusually gray and misty on the morning of Dec 13. Somehow it was fitting for the task at hand. A few minutes before 8:00 am, Jac and I sat with heavy hearts and teary eyes in the driveway with one very sick little boy in the lap of his loving mommy. The engine came to life with a start as the windshield wipers cleared the mist away much easier than the tears blurring our vision. Every movement I made was slow and deliberate. What waited at the end of this short drive would be painful for us, but for Roger, we knew it would bring sweet release from a body that had turned on him.

I reached over and tousled his now low-hanging little head. He had ridden many times in Jac’s lap since coming to live with us eight short years ago, and this was one of the rare occasions he wasn’t begging me to drop the window enough for him to hang his head out.

It broke our hearts realizing this would be the last time our buddy would ever ride with us.

This final ride actually started almost three months ago when a check for a urinary tract infection led to the discovery of canine diabetes. We were devastated at the time, but with support from our sweet local vet, we thought we were on track to keep him going for many years as long as we maintained a strict diet and gave him the required daily injections to help regulate his blood sugar.

We were warned at the time that some dogs don’t do well with this disease, and Roger may fall into that category, unfortunately. But we knew our boy’s indomitable spirit and left that day convinced that he would surely be one of the lucky ones. We did everything as directed. We kept him on a strict feeding schedule and cut out any treats aside from his regular feedings. It was hard on all of us at first, but in time, we fell into the routine and things seemed to be okay.

However, with nearly every subsequent appointment, a new malady was detected. Within weeks of his initial diagnosis, we rushed him to the hospital where they found pneumonia in one of his lungs. We thought we were going to lose him then, but he managed to pull through. What we couldn’t admit at the time was that we actually had started the process of losing him then. He was never really 100% after that. But we weren’t about to give up on him. Slowly but surely, he came back around, and we doubled our watchfulness for any irregularities to keep him well.

Since this all began, it seems we have been to the vet with him every couple of weeks. It was discovered he had a heart murmur, he was losing weight, and many days he struggled to stand up as his limbs seem to get weaker and weaker.

We watched him deteriorate right before our eyes and relished the moments when he felt like his old self and would roll in the grass or wade in the gulf or chase a bird from the yard.

Since this past Wednesday, he has hardly eaten anything, and what little he did eat he promptly vomited. On Sunday night close to midnight, we rushed him to the emergency room. We had been worried about him and had plans to visit the vet on Monday (this) morning. But as we were heading to bed, he began seizing violently and we knew he couldn’t wait until morning.

In the emergency room, we were informed his kidneys were shutting down and any procedure they could offer would likely not be successful. They gave him a shot to quell his nausea, and we headed home around 2 am.

During the ride, we had resolved ourselves to the fact that we were going to lose our little man (in less than a week according to the emergency room vet, and that would most likely mean a week of him simply starving himself to death, a thought that broke our hearts) and decided to seek an end-of-life solution on Tuesday.

However, when we got up this morning, the thought of having him languish another 24 hours just didn’t seem humane. We made the decision to head over to our local vet who knew him well and ask that she help him transition from his earthly bonds.

In the back of our minds, however, we still held out hope that she would tell us something different than what the emergency room vet had said. Maybe she will find out that that vet had read something wrong and this was simply a bug that antibiotics would clear up, and he would be up and around by the next day.

The look on her face as she entered the examination room let us know this was not the case. She had already been in touch with the emergency room vet and had come in to confirm the findings and to kindly ask us how we wanted to proceed. We listened to her explain again what was happening with him as I clutched him close to my chest. Tears began to stream down our faces as the reality of what all of this meant began to soak in.

Once we had settled on the fact that it was time to say goodbye, she tenderly took him from my arms and retreated to the lab in order to insert the catheter that would allow her to administer his final dose of medication. She was back within a few minutes and instructed us to spend as much time as we needed saying goodbye, and she would return when we were ready.

Much too soon, we found ourselves inviting her back in.

We held him and looked into his eyes as the sedative was administered. It worked much faster than either of us expected, and we knew it was time to stroke his broken body and furry head one last time while his heart was still beating.

Shortly before 9 am, he left this world and left two heaps of crying bowls of jelly on the examination room floor.

We couldn’t believe he was gone!

What had we done?

We wanted one more year with him!

But he was gone, and there was no turning back!

In that moment, we had forgotten why we had brought him there in the first place. All we could think about was ourselves and how we ached to feel his heartbeat against our chests one more time. How we wanted just one more stroll on the beach with him at our sides. How we longed for one more golf cart ride with him tucked safely between us.

We were being selfish, of course. We know that he would have wanted all those things as well, but what he wanted more than any of that was to be relieved of the pain of this world, and that was what he deserved.

He has been a loyal companion to us for more than eight years, and we will miss the jolly little man he once was for the rest of our lives.

Well, it’s almost 10:00 pm, and this will be the first time in a long time that Roger and I won’t be making our nightly stroll around the backyard before heading to bed.

He was ornery. He was pig-headed. He was a charmer. And for just a little while, he was all ours and every ounce of love in his furry little carbuncle belonged to us.

Daddy loves you and misses you.

I’ll be sure to save a spot for you on my side of the bed should you tire of chasing birds through the clouds and just need a place to rest for a while.

With all my heart, Rest in Peace,
Just Me. 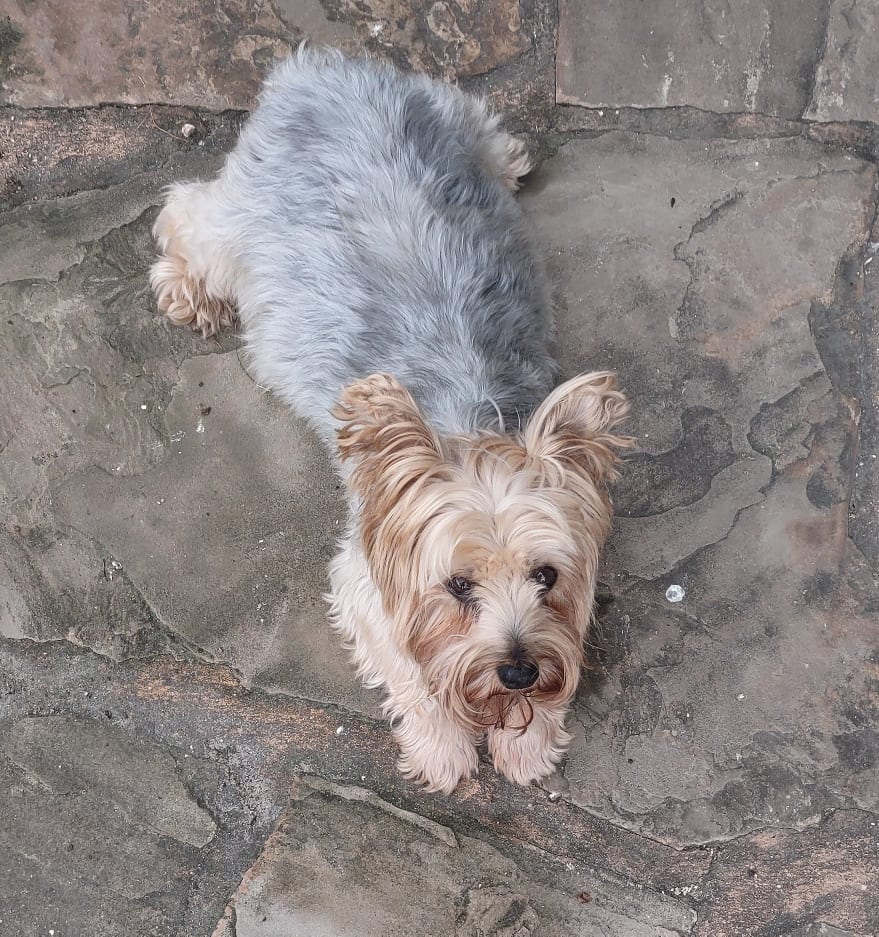 8 thoughts on “Anchors Aweigh, My Friend”